Resonance Health is pleased to announce today that it has signed an agency agreement to distribute an Artificial Intelligence (AI) Diabetic Retinopathy (DR) grading tool.  The contract is for a 2 year period, renewable based on performance and written agreement.

Affecting 1 in 3 diabetics, DR is a major complication of diabetes which can lead to blindness if left untreated.  The DR market is set to exceed USD $11 billion by 2024 according to a new research report by Global Market Insights. Additionally, advances in DR treatment coupled with research activities aimed at developing innovative products to treat diabetes related vision impairment, may fuel market growth even further.

Almost all vision impairment and blindness from DR can be prevented through effective diabetes management and screening programs. Globally, the reliable detection of DR is rendered problematic because of limited access to trained specialists such as ophthalmologists and optometrists, who are expensive and overburdened, meaning long waiting periods are common.  As a result, DR remains critically underdiagnosed across the globe, leaving patients at serious risk of diabetic eye disease.

Resonance Health in conjunction with TeleMedC will be able to provide DR screenings for large populations via primary healthcare providers.  We aim to provide early detection of DR at a very affordable price with very efficient outcomes.

The technology, named DR Grader, was developed by leading researchers in Australia. The artificial intelligence (AI) based fully automated DR software system uses images of the eyes and clinical risk factors to provide a reading accuracy of over 92%.  These results are then reviewed by eye specialists to address the complete needs of those patients needing further care and treatment.

The image below shows sample eye images of various grades of DR. 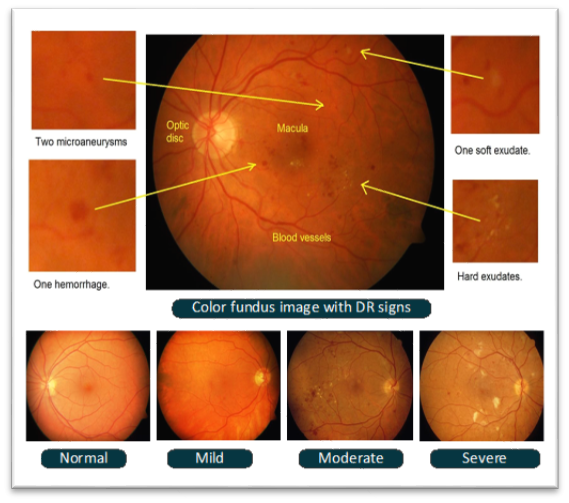 The decision has been made by the Company and TeleMedC to initially target countries in low regulation jurisdictions, where access to ophthalmology services is extremely limited.  Resonance Health is currently working with TeleMedC on gaining appropriate regulatory clearances. The Company will commercialise first in Lebanon, Pakistan, and Bangladesh.  Additionally, the Company has rights to market the product in China and will do so subject to appropriate regulatory clearance.

In Pakistan, which has a population of 193 million people, 35 million to 37.5 million people above 20 are estimated to be suffering from diabetes.  One study estimated the prevalence of DR in Pakistan at 26%, with estimates rising alarmingly to 66.1% in those above 51 years of age. (Khan AJ. Prevalence of diabetic retinopathy in Pakistani subjects a pilot study. J Pak Med Assoc. 1991; 1 (1): 41- 49.).

Bangladesh, with its population of 163 million, has an estimated 16 million plus diabetics.  Of these one in four are at serious risk of losing their eyesight to DR.  Indeed, across the country, 750,000 adults and 48,000 children are known to be blind, with approximately 2.5 million people at risk of developing diabetic retinopathy.  With only 950 ophthalmologists, Bangladesh faces daunting challenges in delivering quality eye care to its expansive population.

The Company has built significant capability in the AI space with its FerriSmart product as well as ongoing development in other disease settings.  With its expanding suite of products in the important metabolic disease space, the Company is now pleased to offer DR Grader alongside HepaFat Scan (for  hepatic steatosis), pancreatic fat scan for pancreatic steatosis, NASH-Scan (for steatohepatitis) as well as a genotyping panel for fatty liver disease.

Resonance Health is providing consulting services to TeleMedC on gaining regulatory clearances, which are a prerequisite for marketing the product.

Further updates will be provided as work progresses.